I’m going to say this very quietly and I may be wrong but I think I might be missing that thing called Fashion, just a little bit. It generally happens around this time of year, show time. I didn’t even really enjoy the shows that much, well not at the time anyway. When I was a young magazine fashion assistant I despised being made to stand right at the back where I couldn’t see anything but the odd pony tail swishing down the catwalk. Even worse than that I absolutely dreaded being made to sit in the front rows – to fill a space for a missing editor I might add – as I felt like a complete fraud and was always always wearing the wrong shoes / outfit / sock and shoe combo / hair style / coat….you name it, I got it wrong.

Then, when I crossed to the other side and was faced with the dreaded seating plan, I would spend days and nights and weeks pouring over the same row layout, wishing for more seats and feeling sick at the prospect of being screamed at. And always by a journalist in row 5 or 6. And generally from the Daily Mail. Not mentioning any names obviously.

So why would anyone in their right mind miss it? Well quite frankly, I’d like to put on a dress and some heels (even if they were the wrong ones) and I’d like to go to a show (I’ll decide which one in a minute) and not give a shit who was sitting next to me, in front of me or behind me. I’d like to take the goodie bag home because it really is supposed to be for me and I’d like to eat whatever might be on offer because I now know it’s absolutely fine to actually eat. And, I’d like to write notes in my notebook of all the things I think are lovely and not have to do anything about it but go home safe in the knowledge that fashion is still alive and well. And most of all, I’d just like to be reminded that there is definitely more to life that Breton stripes and Toast.

That’s better. I think I’m over it now. What? There are fashion shows happening right now in NY? Really? I hadn’t noticed.

Yesterday, when having morning coffee with a friend, I learned something about our current state of mind (worrying about everything) and apparent addiction to the Daily Mail website. Oh dear, what on earth has happened to us. I’m putting both down to age and too much time on our hands – by time, I mean the time spent running around after children, not the time spent lounging around reading magazines. That would be ridiculous. I definitely subscribe to the first problem, the worrying. I worry about everything, I worry about worrying. I worry when I have nothing to really worry about. My old age (I’m not really very old I just behave as if I am) has me worrying about my health and my family’s health all the time. It’ll probably be the worrying that gets me in the end.

Because I’m a worrier I actually live a pretty healthy and sensible (prudish) life and being a relative new-comer to countryside dwelling, have come to embrace nature and the natural. My latest discovery in the world of natural remedies and ways to enhance your life and health is this brilliant book, Kitchen Medicine – Household remedies for common ailments and domestic emergencies. I think it could be my new addiction. I’m currently drying rosemary and thyme sticks which I will burn and  “waft” around the room to promote well being and clear air. I’m definitely making some rosemary wine (to aid circulation) and will be making fenugreek tea  to take as tonic when the next cold and flu hits the house….which, judging by probability, should be some time next week. The book is full of easy remedies which can be created in minutes using all sorts of things we have lurking in the spices cupboard or growing in the garden. Or failing that, things we can easily pick up in the shops. Cinnamon is apparently particularly good for treating sinus infections, chesty coughs and head colds, all of which are regular visitors to this household. So next time, we won’t be drugging ourselves with Night Nurse but warming our insides with star anise tea and a shot of cinnamon vodka in a bedroom sweet with rosemary and thyme and sleeping like babies with not a worry in the world.

For those with the Daily Mail website addiction I’m afraid I can’t help. Cold turkey seems to be the only way. Repeat after me – I don’t need to see Tulisa in a bikini doing whatever it is she does or a Middleton in pastel jeans (I’m guessing) or the some poor overweight orange person. Look at Pinterest instead, you’ll find the same pictures without the gutter press guilt.

Absolutely Nothing To Worry About : Pinterest and The Etiquette of Pinning

Posted: February 29, 2012 | Author: Mel Moss | Filed under: Absolutely Nothing To Worry About | Leave a comment

I wouldn’t say I’m at the obsessive stage of my Pinning, but I’m getting close. I only joined Pinterest a few weeks ago but have been an onlooker  for some time. Every day it seems I see another (often unlikely) person has joined the world of Pinning. Some haven’t taken the Pin plunge yet but they have their boards and they’re following furiously. I know I’m quite a late comer to the party, I wasn’t sure I could cope with yet another social media, file sharing, naval gazing outlet but actually I really do love it and have gained more in a few weeks of Pinterest than in years of having a Facebook profile – which I still consider deleting on a daily basis but can’t quite do it. Now that, I’m pretty sure, constitutes a social media addiction.

So now that everyone seems to be getting the Pinning bug, the question of etiquette has to surely be asked. A Repin is a little like a Retweet (Twitter) or a Like or Share (FB). It’s a way of sharing something you have enjoyed, be it in words or pictures, allows you to show your appreciation publicly (rather than keep it to yourself, which lets be honest, hardly anyone does these days) and keeps the passing on element of social media alive and well. I’ve always tried as much as possible to use my Twitter, Facebook etc primarily for work purposes. As an important vehicle to spread the word about the brands I work with, all of which are online based. You can’t do one without the other, it simply doesn’t work, so very quickly you find yourself sucked in to a whole load of platforms which need updating ALL THE TIME so you don’t get forgotten. There’s nothing worse than watching “followers” falling or “likes” being undone. You may as well commit social media suicide right there and not bother.

And this is where Repinning and Retweeting becomes so valuable – essentially when you haven’t got anything of great interest to say or show, you can just steal someone else’s. It shows you’re still there, you’re still looking and reading and you’re endorsing this bit of information because you whole heartedly agree. But this is also where it gets blurry. When does the RT or RP cross the line?

I had a conversation with a friend the other day who was incredulous that one of her followers on Pinterest not only kept Repinning her lovely finds but didn’t even bother changing the captions to something which reflected her own thoughts.  It had happened to me the day before too, someone had pinned one of my very own pictures and claimed it as their own, no Repin, no link, no nothing. We decided bravely to “report the pins” but neither of us dared press the button to see what happened. We just had a really good Skype chat bitch about it instead. As I typed, I quietly thought about all the Repins I’d committed in the past weeks. Had I changed the captions? Had I Repinned too many things from the same person? Was I a Pinterest pest? Where were the rules? We need to know the dos and don’ts before we all fall out with each other and are labelled social media stalkers and thieves.

Luckily one of the people I follow and Repin a lot, is a very dear friend so I called her to see what she thought. She found it funny – on the outside – and we laughed about Pinterest etiquette for a while and praised each others Pinning cleverness. I bet the moment she put down the phone she too had a little Repin panic. I bet you anything. 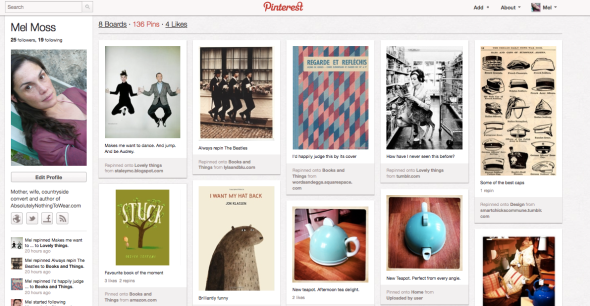 And one more thing, is it correct to use capital letters when writing “Repin” and “Pin” and “Pinning”? Oh who knows, I’ll just keep looking at the pictures.