Absolutely Nothing To Cook : The Key To Key Lime Pie, by Micki Myers

One of the most glorious food items that gets utterly ruined when people try to mass market it is Key Lime Pie. One of the biggest food faux pas is when people mistake or knowingly substitute your regular green limes for key limes, which are not the same thing at all. The key lime is a tiny thing, the size of a cherry, and looks like a yellowish-mottled kumquat. Its flavor is far less tart than its Hulkier cousin, too — instead it is sweet yet piquant, with none of the bitterness of a lemon. The pie made from it is designed especially to showcase this lovely citrus flavor, and is well worth making.

First, you’ll need to zest and squeeze 20 or so key limes. Use a plane zester and an old-fashioned glass squeezer upon which you can palm each half lime. I find myself giving it a quick press and then pinching the spent skin over the glass knob to finish it off. I also take my time, alternating with other chores; try to do them all at once and you’ll bugger up your wrist something chronic.

Make a graham cracker or biscuit crumb base. If you’re American this means zapping graham crackers in a food processor (or just buying it already crumbed); if you’re British it means doing the same with Digestive Biscuits. Mix with the melted butter and sugar, press into a tin, and bake for 5 minutes or so until it’s firmed up a bit.

Mix the zest in a bowl with the egg yolks and lime juice, then add the condensed milk. A tin of condensed milk out to be a pantry staple for emergencies. Be sure to use a spoon to scrape every last succulent, sugary drop of it from the tin rather than simply diving after it with your tongue.

You’ll have a luscious, pale custard. Pour this into the biscuit base, set the whole thing onto a baking sheet, and pop in the oven for 15 minutes until the heat has had a chance to work its magic on the eggs. It will still seem a bit too wobbly when you take it out, but that’s OK — the next step firms it up. Once it has cooled to room temperature, put some cling film over it and pop in the fridge for a couple of hours.

The finished pie will be diminutive in height, and a luxurious creamy color flecked with bits of pale green zest. Cut small slices; this baby’s rich.

If there’s any left, refrigerate until midnight, then sneak out of bed and polish it off.

Absolutely Nothing To Talk About with Jools Oliver

Jools Oliver is not only mother to 4 gorgeous children and wife to the brilliant Jamie, but she has also just launched her very own children’s fashion collection, Little Bird, for Mothercare.

She’s beautiful, clever, creative and very very busy….and she still found time to talk to ANTW about all sorts of Absolutely Nothing….. 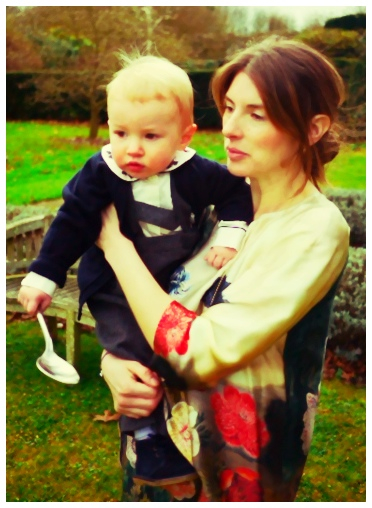 Absolutely Nothing To Make

It has to be make shift dens in the garden for the kids using blankets, chairs or  their climbing frame!!! The best ones are the ones we made in the wood as kids with sticks and branches. They stayed there for years if you hid them well.  We are teaching the kids how to make them now and it’s such good fun.

Absolutely Nothing To Do

I just discovered bike riding again after literally 25 years, shocking!!!! We went on a ride with all the children and it was such fun cycling through the countryside, legs in the air, flying down the hills and cycling to the swings, they were all so happy. It was a real trip down memory lane.

Absolutely Nothing To Listen To

I’ve just come back from a much needed holiday and it was so nice to be able to listen to  my husband with out any interruption from little people!!!!! He is really interesting!!!!!

Absolutely Nothing To Read

I’ve just finished Afterwards by Rosamund Upton. Such a lovely written book about a beautiful relationship between a mother and her children with a bit of who done it thrown in to keep you extra hooked. I loved it. 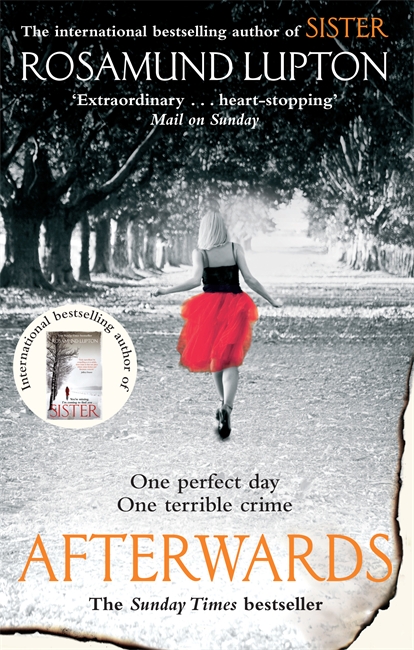 Absolutely Nothing To Buy

I just bought the girls a little digital camera and it’s fantastic to see them take their own pictures and then download them on the computer. They are better than us at all the techno stuff and their images are so lovely. They have a very different perspective on the world to us.

Absolutely Nothing To Watch

I just watched the Usain Bolt documentary, The Fastest Man Alive, in the build up to the Olympics and it was so inspiring, what a extraordinary man. I have so much respect for all athletes after watching this.

Absolutely Nothing To Eat

I’ve just started picking our tomatoes fresh from the polytunnel and adding them to courgettes, green beans, garlic and greens all from the garden. Roasted slowly they have the most fresh, unbelievable flavour.

Absolutely Nothing To Wear

So nice at last to wear a bikini as soon as the sun comes out. Feels so lovely and warm on the skin and great to be able to see all my kids playing in the garden naked!!!!

Absolutely Nothing To See

I’ve been taking the kids down to Audley End Miniature Railway nearly every day this Summer hols they love weaving through the woods on the little steam railway track screaming out at all the teddy bears hidden in the trees. We’ve had some fabulous picnics in the flowers too, very cute.

Absolutely Nothing To Cook

My daughters Poppy and Daisy make the best scones so we love freshly baked warm scones for tea with jam, butter and sometimes with sliced bananas and honey.

Absolutely Nothing To Love

When Mo Farrow won his gold the excitement in our house was unbelievable, such a great atmosphere. I just loved seeing the kids getting in to something so brilliant and inspiring.

Absolutely Nothing To Get Excited About

My new collection Little Bird just launched in Mothercare. It feels so amazing. I’m constantly excited and nervous to check my emails in the morning or the Mothercare website to see how the clothes are selling! It’s all such a new experience for me and it feels really amazing to have the chance to be creative for a change.

The launch of Little Bird at Mothercare

You can also catch Little Bird at this weekend’s Big Feastival in Oxfordshire. More HERE

Yes he’s my husband but that doesn’t mean he can’t be clever and that I can’t tell people how clever he is….so here we go.

The Big Chair Project is the brilliant creation from The Better Food Foundation, the charity founded by Jamie Oliver in 2002 which aims to give young people a brighter future through food. 2012 marks the 10th anniversary of the foundation and after successful yearly fundraisers, it was decided to do something a little bit special this year to ensure the foundation can keep going for another 10 years and beyond.

20 artists were each given two Fritz Hansen ANT chairs with which to create a unique piece of design. One was for practice and one was to submit to the charity auction, the Big Bid. Jay Jay was one of the artists approached to take part and has created the Chilli Con Carnivore chair which I hope will both make someone very happy whilst raising much needed pennies for the cause.

They also shot this great little film of Jay Jay talking about his chair. Watch it, share it, bid on it or just enjoy it. My kids have watched it about 1,200 times….

The best Tracteur in town

So as not to repeat myself, here’s a simple and delicious visual post which I hope illustrates last night’s dinner perfectly : 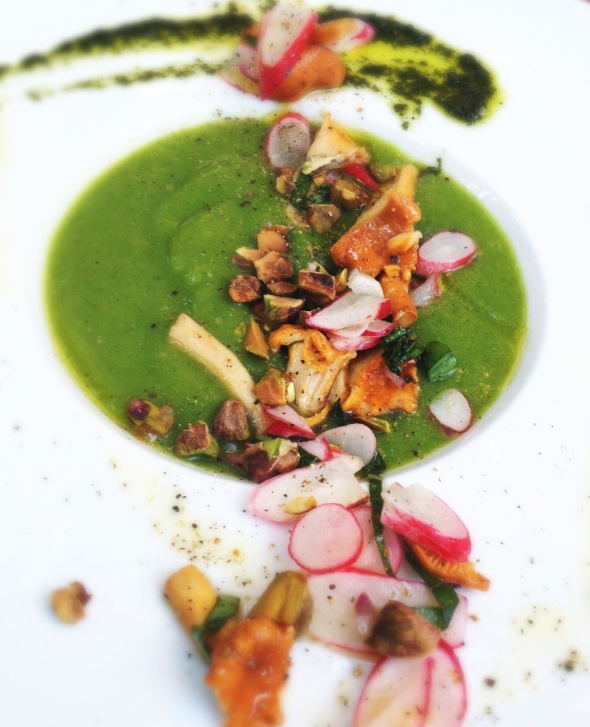 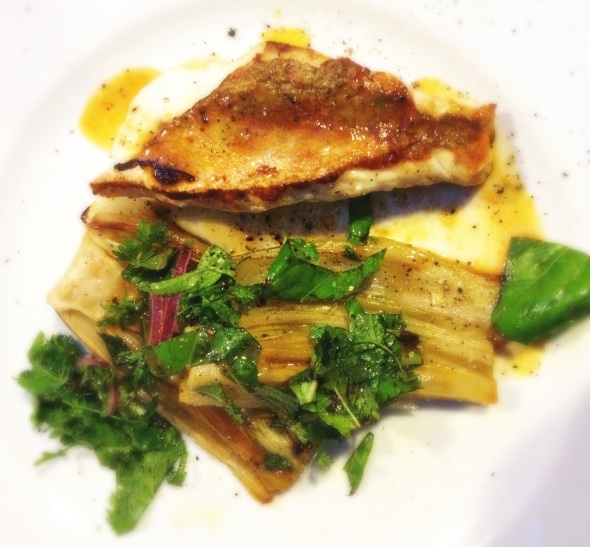 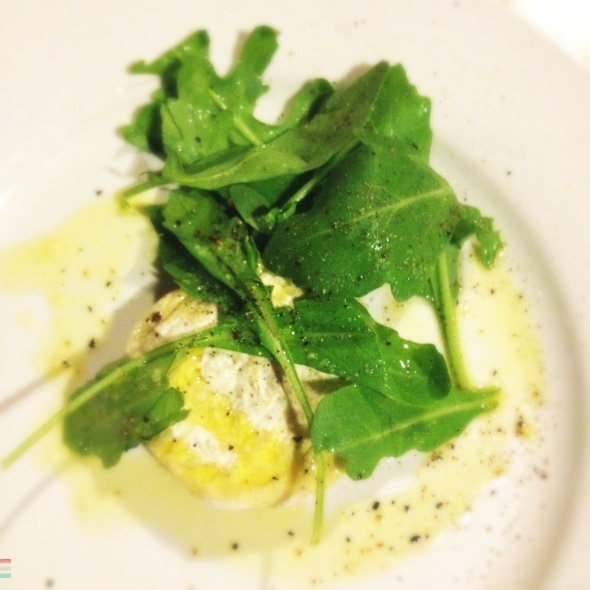 I’ve been a little lazy with posts recently but if I don’t write this down now, I’m worried I might forget it.

We’re in the South of France at the moment, having a wonderful time with family and friends and eating delicious things. These holidays always very much revolve around food. Conversation at breakfast is generally about what’s on the menu for lunch and dinner and everyone is keen to offer their own contribution to the table. Last night was my turn and so baked peaches with Roquefort and Parma ham for 12 was on the menu. With my trusty sous chef by my side, we managed quite a spectacular plate of food and one I’ll definitely be making again….but perhaps in smaller quantities.

So here’s what we used and how we did it :

Peaches – we used a mixture of big round ones and the little flat ones all stoned and quartered. Allow about 4 pieces per person.

Thyme roasted almonds – or you just as easily use plain

First we baked the peaches on a low heat for about 30 minutes. Just all huddled in a tray and sprinkled with sugar, salt, pepper, olive oil and some fresh thyme. 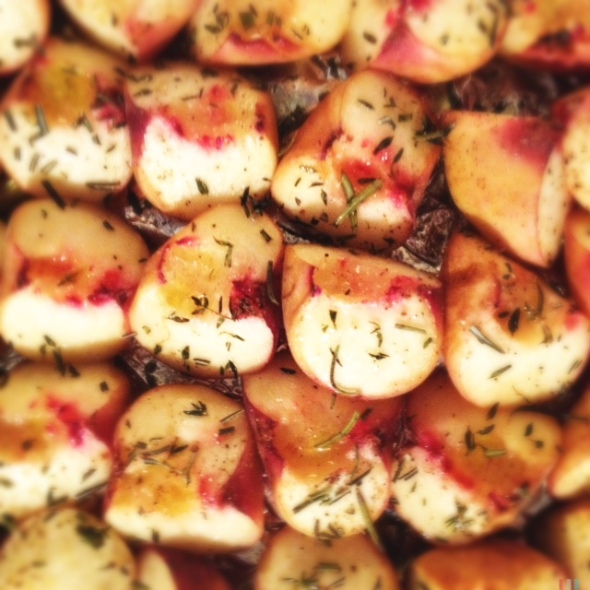 Once done, leave them to cool a little – the salad is best served at room temperature.

The nuts – we bought a bag of walnuts and thyme scented almond. The walnuts we drizzled with honey and put in the oven for 15 minutes or so until the became sweet and crunchy. Once cooled, smash them all up in to little pieces with a rolling pin – the almonds too. Set aside to use later. 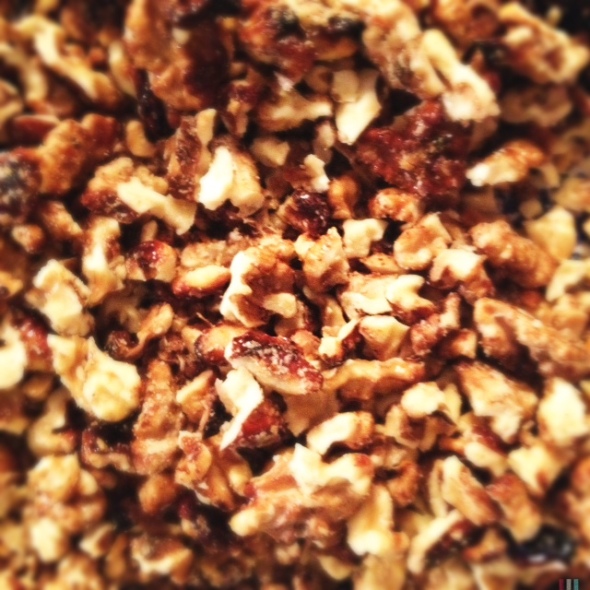 We cut the parma ham in to small strips and crumbled the roquefort….more about this later

Dress the leaves with a little bit of olive oil and vinegar. It doesn’t need a strong dressing as all the flavours are to come.

Place a small pile of leaves on the plate. Set the peaches on top and lay the strips of parma ham across them. Not too much. Sprinkle the crumbled roquefort – again, you don’t need too much – and drizzle some of the juices from the peaches pan over the salad. Lastly throw some of the crushed nuts around the plate and that’s it! 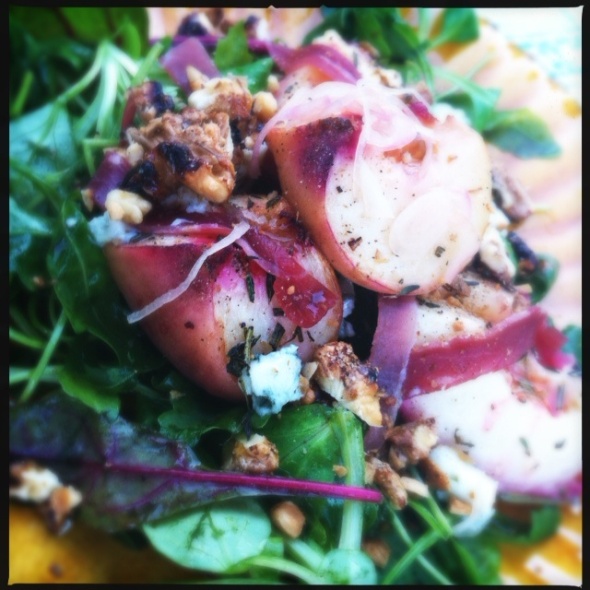