I made this last night and it was delicious. It’s also really good cold with a green salad – as proved by the left-overs consumed today.

I didn’t have every single seed and spice but I don’t think it necessarily needs the lot. Just follow the general flavours and you get the same result.

I’ve copied and pasted the original Ottolenghi recipe from The Guardian website. You can see the full page here.

By roasting the butternut with Indian spices and some stock, it properly soaks up the flavours and ends up tasting marvellous. Serves four.

Heat the oven to 200C/400F/gas mark 6. Put the butter and oil in a large sauté pan, and fry the onion for eight minutes over medium heat until soft. Add the butternut, turn the heat up to medium-high and cook for 10 minutes, stirring occasionally, until it starts to colour.

Remove from the heat and add half a teaspoon of salt, the seeds, spices, chilli and sugar. Mix and transfer to an ovenproof dish large enough to hold everything snugly. Pour in the stock and roast for 30 minutes, by which point the butternut should be tender and all the liquid absorbed or evaporated.

Serve warm with yoghurt spooned on top, a sprinkling of chopped coriander and a few nigella seeds.

I want to join the circus….but only if it’s Giffords.

I want to play the accordion, I want to wear Victorian bloomers and over the knee stockings with high heel ankle boots. I want a Shetland pony and I want to learn to dance, properly. I’d like an enormous circus bell tent and a wagon serving fresh cooked pizza. I might even like a tea tent with a never-ending supply of chocolate brownies. Oh and I’d also like a goose, a real one, who follows me wherever I go.

I haven’t been to the circus since I was small and have always been hesitant to go as an adult in case I might spoil the memory. Giffords is just about the best circus experience I could have imagined. I honestly can’t think of a better way to spend a Sunday morning, or anytime of the day for that matter, on any day of the week.

The circus will be touring until mid September and wherever you may be, it is more than worth the trip…and the pennies.

Absolutely Nothing To Talk About : Suzanne and Lauren McGrath

Suzanne and Lauren McGrath are a mother–daughter interior design team who edit and write the design blog Good Bones Great Pieces. Suzanne is a former Style Editor and Producer at Martha Stewart Television and Lauren is a former fashion features writer for Teen Vogue magazine. They live in New York City and Rye, New York.

They took a break from their UK book launch to talk to ANTW about all kinds of Absolutely Nothing…..

Absolutely Nothing To Watch…

Absolutely Nothing To Eat…

Our favorite brunch spot at the moment is The Smile on Bond Street in NYC. It’s the cosiest restaurant in the city with the best baked eggs and avocado we’ve ever had.

Absolutely Nothing To Do…

Summer is the best time to go flea market and antique shopping and our number one stop is always Brimfield. It’s a tri-annual antique show that happens in May, July, and September where antique dealers from across America set up shop.

Absolutely Nothing To Cook…

Lauren and her friend Perrin recently threw a dinner party at a friend’s house in East Hampton with a Middle Eastern-inspired menu. The homemade tabouleh was a big hit. Check it out here

Absolutely Nothing To See…

Absolutely Nothing To Wear… 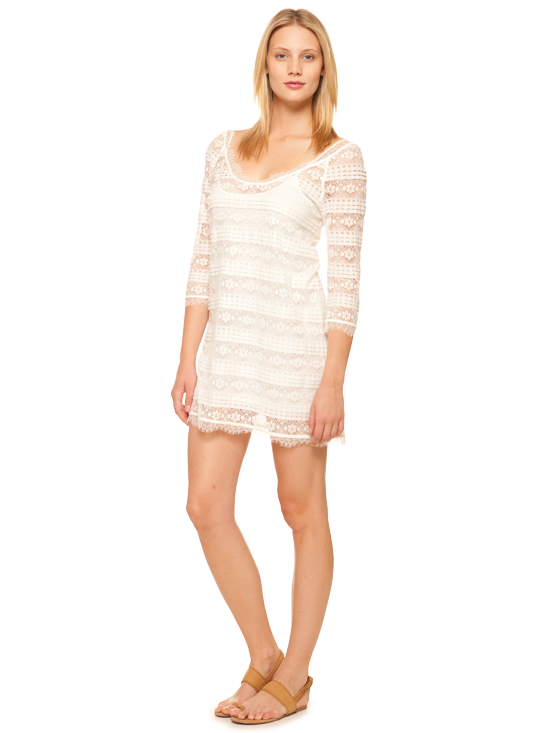 Absolutely Nothing To Get Excited About…

A “sleeper”- a great tag sale find / antique that turns out to be worth much more than its price tag reveals. Yes!

Absolutely Nothing To Read…

Our new book! Good Bones, Great Pieces: The Seven Essential Pieces To Carry You Through a Lifetime

Absolutely Nothing To Open : Cotton Mailers and Indian Quilts

Posted: June 18, 2012 | Author: Mel Moss | Filed under: Absolutel Nothing To Open, Absolutely Nothing To Smile About | Leave a comment

I wasn’t going to tell a soul about these quilts and I’m still not sure whether to part with every detail but they are too lovely not to share – in picture form at the very least.

They were bought online and arrived this morning in the most exquisite hand sewn cotton mailer bag I have ever laid eyes on. It was almost enough on its own.

Absolutely Nothing To Eat : Linguine with Tomato and Capers

It may not sound like the stuff of culinary revolutions but this is just about one of the best spaghetti dishes I’ve ever made. It was the happy result one of those can’t be bothered, far too tired sorts of dinners. After being monumentally let down by Rico’s Pizza Shack (the most delicious wood fired pizzas served from a travelling food truck…which didn’t show up) I had to resort to something quick and tasty from a very empty fridge.

What I did have was a tin of tomatoes, a jar of capers, 2 lonely looking cloves of garlic, some fresh herbs, a packet of Linguine and ta-daah…it was delicious. 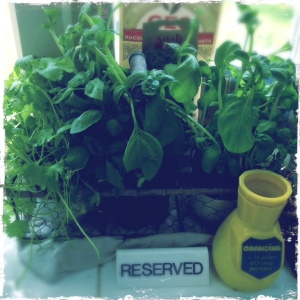 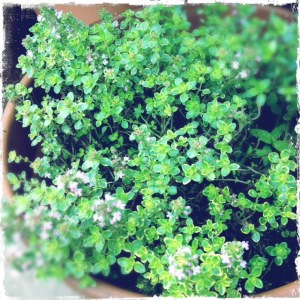 Put a spash of olive oil and some butter in a large frying pan, throw in the crushed garlic and a handful of chopped rosemary and thyme. Cook it for a minute but don’t let the garlic go brown. Add the tin of chopped tomatoes and a couple of teaspoons of capers (the small ones) or as many as you fancy. Stir it all together and cook on a medium-ish heat. I added a tiny bit of salt and some ground black pepper. I also stirred in a teaspoon of sugar but you can use balsamic vinegar or something similar if you prefer…and you have it in the house. Cook for 10 minutes or so until the liquid from the tomatoes has evaporated a bit and the whole thing looks dark and rich. It really doesn’t take long. Cook your Linguine (or Spaghetti…it doesn’t matter a bit) as normal and drain. Just before combining it all together, stir a couple of teaspoons of creme fraiche to the tomato sauce and some torn basil leaves. Add the spaghetti to the frying pan and mix it all together so every single strand is covered. Serve straight away with some more fresh basil leaves to make it look pretty.

Sorry my spaghetti photo is a little blurry – I was hungry.

Absolutely Nothing To Wear : Hats off to Ebay

Whilst trawling Ebay for some extra Fisher Price coins to go with the boys’ 1970s cash register….they’re old school kids who like to play shops / demand money….I got a little distracted and found these two fabulous vintage straw hats.

They’re both a little bit small for my not quite so dainty vintage sized head, but I love them all the same. The smaller one does in fact fit (just) so I’m determined to find an occasion to wear it, even if it’s just to visit my 3 year old’s shop. 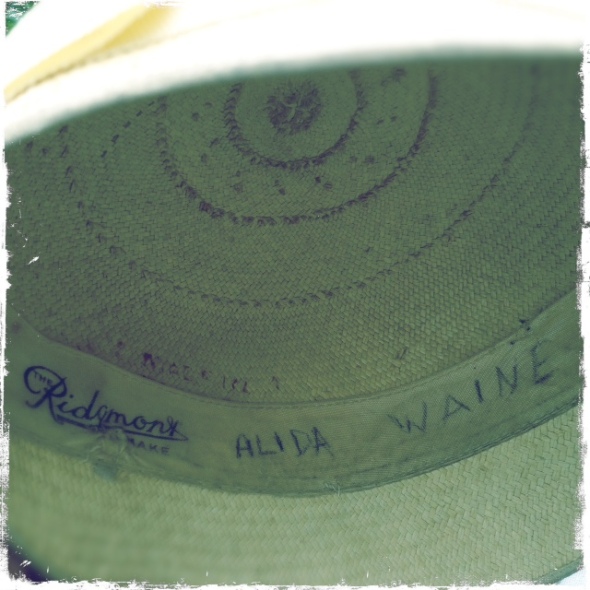 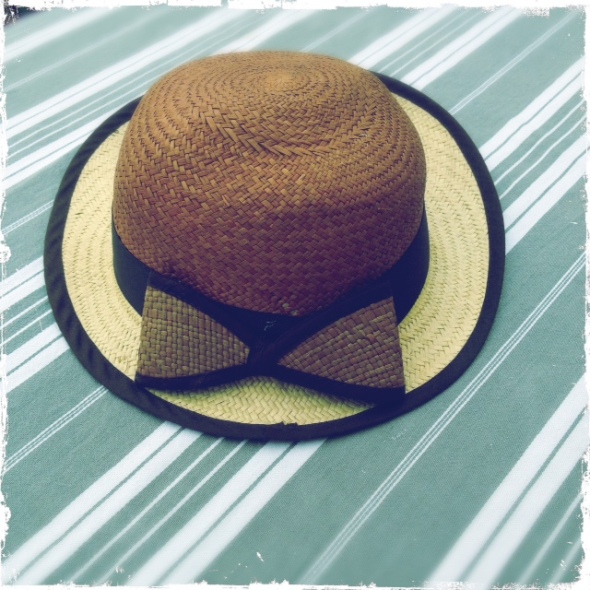 Absolutely Nothing To Wear : Tallulah and Hope Summer 2012 – the perfect kaftan

There was a time I thought Kaftans and Ponchos were only suitable when heavily pregnant. Perfect for loosely covering the bump and any accompanying lumps. Those times have very much changed and now my Summer outfit of choice (when it stops raining) generally involves the poncho / kaftan vibe. I’m not sure of the difference between the two so I’ll use both names. I’m basically describing the same thing.

Tallulah and Hope have been my favourite kaftan / poncho label since they wafted on to the web in 2010. I’ve always been very very partial to a Winter cape (their circle cape ponchos are amazing too) and they helped to lead me seamlessly in to the silk Summer versions. They can be worn over bikinis by the pool, over slips to transform in to the most beautiful dress, over jeans for a casually chic evening party outfit and pretty much anything else you fancy. The cut means you can wear them with the V-neck at the front or back. I like the V – front for daytime / holiday wear and at the back when styling as a dress or top.The belted versions are genius, the fit could not be more flattering and you can even lift your arms way above your head…..which when it comes to kaftans worn with belts is not often the case.

So, the point of this post is really to tell you that their new Summer 2012 collection is now available from their online store and it is completely exquisite.

Trust me, you’ll wear your T&H kaftan / poncho more than you ever believed possible. 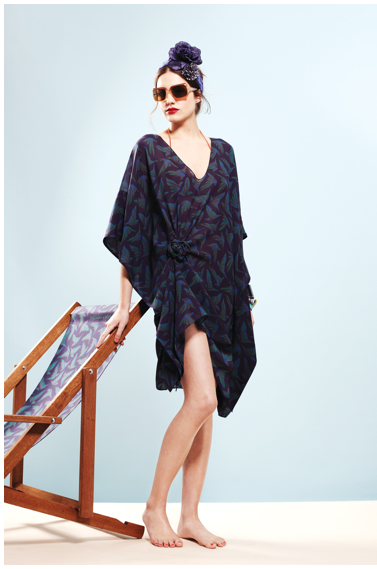