Absolutely Nothing To Wear : Very Lovely Patent Brogues (which I should have shared sooner)

I’m not usually very sharing when it comes to fashion finds. And by that I mean the clothing and shoe types of finds. Mainly because I like to think that I’m the only person in the whole wide world who owns that particular item. Even when I’ve bought it from one of the busiest online stores in the whole wide world. So, for that reason, I’ve been keeping these to myself for a couple of weeks but seeing as I am far from unique and in fact probably dress like 99% of the population (over 35) I’ve decided it’s time to share them.

I present to you the Maurice Brogue, courtesy of the one and only ASOS. I saw them in Living Etc, they not only provided a welcome relief from the more of the same interior ideas but they were just kind of snuck in, quietly, when they probably should have had their own entire page. I always most like the objects which don’t really fit in, which have no reason for being there other than that the stylist took a fancy to them and hoped to make them theirs, permanently.

But what really made me take notice was the price, they were £38 which for a patent leather brogue seemed pretty good. And, seeing as the main reason I read these magazines is in the hope of finding a bargain to satisfy my online shopping needs, it was pretty much ideal. But the reason I’m really sharing them is because I did go online and I did buy them and they were in fact reduced to £26 and I now have them and they are simply, perfectly lovely. They shall be my daily Summer brogue (that’s how I’ve sold them to myself) and they are currently positioned in front of my wardrobe where I can see them, which for now, and for the duration of these April showers, will just have to be good enough.

Get them while it’s still raining. No one in their right mind (or of shoe size 5 or 6) would buy a pair of patent brogues in this kind of weather.

Absolutely Nothing To Discover : Lily Of The Valley, by Micki Myers

Lily of the Valley always reminds me of soap — probably because that’s where you tend to encounter it. It seems the most antique of scents, and well-suited for soap because it smells so nice. Drawings of it also look really pretty on soap wrappers, the little white bells delicate and fairy-like.

I was very pleasantly surprised to find the sneaky little bells popping up among the ivy and thistles that line the alleyway leading to my house this morning. I’ve never seen them before, but they’re rhizomes, like irises and ginger, who each year send up new shoots from a woody root. With luck, they’ll decide to stay and welcome in the Spring next year too.

Next time you see Lily of the Valley, and think how lovely and innocent they look, remember that every part of them is extremely poisonous. Make no mistake: eat these instead of sniff them and you will be made dead. 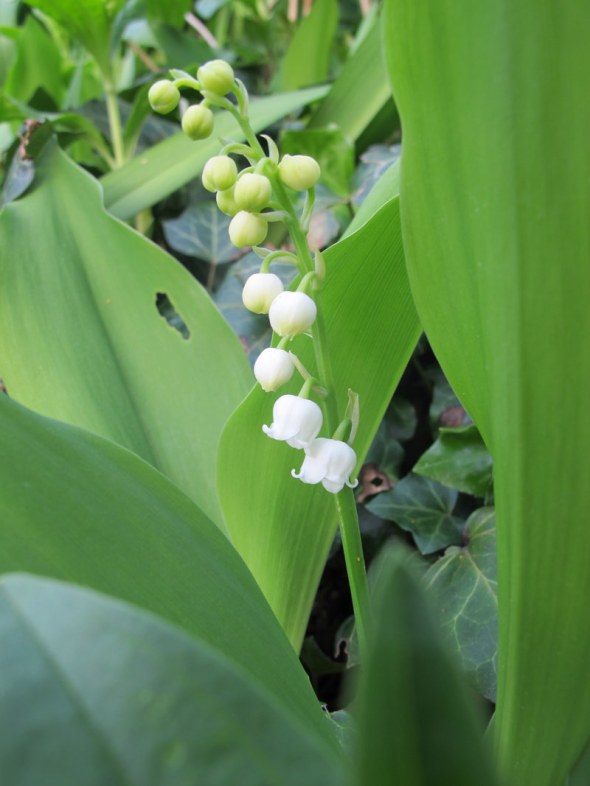 Absolutely Nothing To Smell : Hyacinths and Lavender Oil

I’ve learned a few things recently and all are to do with smells. The first is that scented hyacinths make me enormously happy. They  not only look wonderful but smell delicious. They’re coming to the end of their blooming so aren’t very easy to find but if you do spot them, buy them, they’re worth every penny. Put them in a pot where you can’t see the stalks, they’re not very pretty, it’s all about the flowers and the leaves. 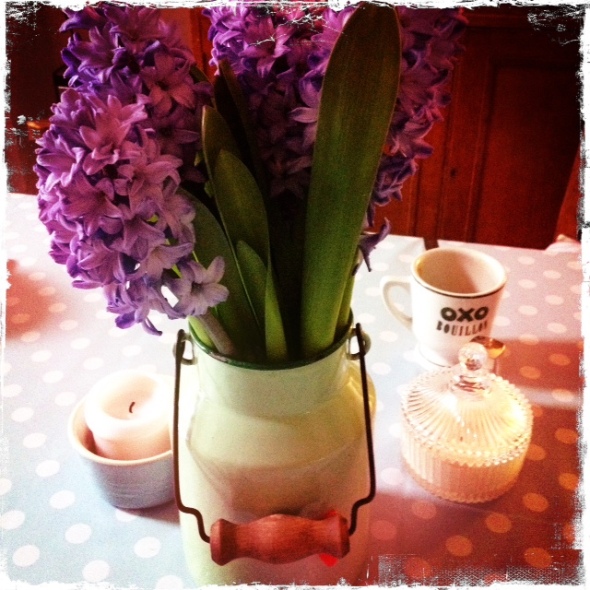 The other smelly thing I’ve learned is the joy brought by lavender oil when used in washing. I’d often been told about adding a few drops to the softener compartment in the washing machine but never really believed it would do anything clever but it does. I never use bought softeners as I have two children with crazy sensitive skin which reacts at the merest hint of perfume. So, I thought natural lavender oil was worth a go, especially since it’s apparently very good for keeping moths and other mites at bay. I used it for the first time yesterday when washing the kids bedding and it emerged with the most wonderful subtle scent which I’m hoping will aid a good nights sleep as well as making me feel very homely indeed.

My oil is from Celia Lindsell who uses French Organic Lavender in all her products. You can buy it online too.

And that, you’ll be pleased to know, is the end of my housewife post. Phew.

Absolutely Nothing To Smile About : Our New Yellow Teapot

Posted: April 17, 2012 | Author: Mel Moss | Filed under: Absolutely Nothing To Smile About | Leave a comment

My Mother In Law really does have the very very best teapots. This one is an absolute treasure. It shall never live in a cupboard but shall be out and seen and used daily.

The perfect tonic on a dreary Tuesday. 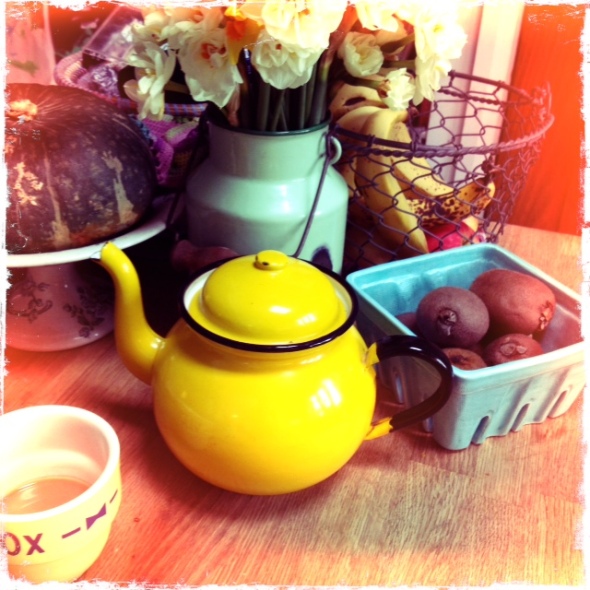 Absolutely Nothing To Be Confused About

For all those who just received a rather peculiar post titled “15th April 2012” I apologise. This was from another blog I write called The New Pickle Diaries. The diaries of a 3 year old.

A small case of blog confusion on a Sunday morning.

It had absolutely nothing to do with Absolutely Nothing To Wear!

Well thank goodness that’s all over. My children are only just coming down from the sugar high and can apparently still see “rabbit foot prints” all over the house. It would seem their minds have been addled by chocolate.  I was determined to have a happy but frugal Easter. One filled with daffodils, country walks and perhaps the odd mini egg, rather than lashings of lamb, masses of eggs and rainy afternoon movies. Obviously it was the latter that won out. Although I did manage to limit the chocolate and began the weekend with gifts of egg cups for boiled eggs and soldiers and a home made chocolate rabbit (my 2012 triumph). These were soon superceded by my husband’s thoroughly modern take on the traditional egg hunt – one where all clues were held on an iPhone – with what seemed like hundreds of mini eggs and went on for days.

First the home made chocolate rabbits. When I say home made, I just melted some chocolate and poured (scraped) it in to a lovely old tin mould we found at an LA flea market, squashed it together and shoved it in the freezer. I would have put money on it not working but it did! I used cheap chocolate which made the whole thing a little less delicate than it perhaps should have been and therefore the rabbits were a solid mass rather than hollow and airy but who cares, the kids certainly didn’t. But then neither did they care that I’d made them. I suppose it was one of those win win situations – I was allowed to feel like a really great Mum by creating something by hand and they just thought I was a really great Mum because I was willingly giving them chocolate.

And here they are, before and after. Hugely satisfying. 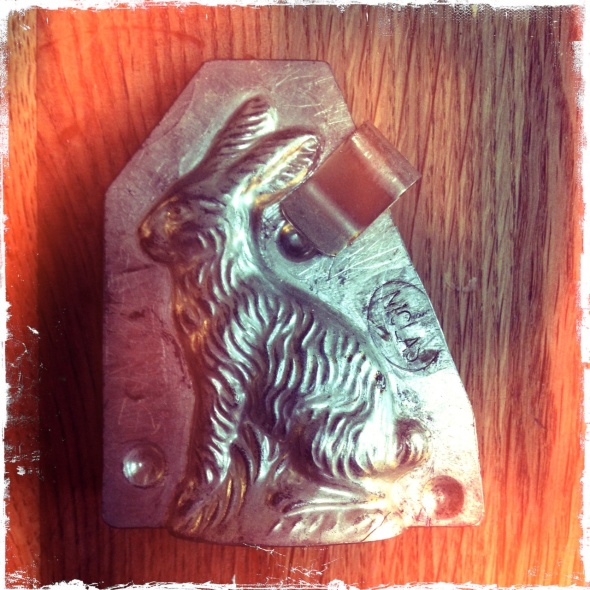 Then on to the Easter egg hunt via iPhone. It’s actually a rather brilliant way of ensuring younger children can find the treasure. Especially when there are older brothers who know exactly what they’re doing and have already formulated a plan to get as many eggs as they possibly can, by whatever means. It works like this, hide the eggs and take a photo of the hiding place. Then, simply show them the photograph, one at a time, and off they’ll charge to find the prize. The only downside is that all good things come to an end and if they’re anything like my children, they’ll still be looking through your phone a week later convinced that behind every single photograph hides an egg.