So that was Movember….

I’ve never taken such a long break from ANTW but there has been a very good reason. This year Lucky Seven Caps – our hat company – partnered the incredible charity which is Movember.

We have spent the last 6 weeks or so in the midst of a wonderful, inspiring, pioneering and unbelievably fun group of people who it has been a pleasure to know. The work they do is nothing short of amazing and we are very proud to have been able to do our little bit to raise awareness and crown some Mo Bros.

And while Jay Jay was growing a Mo and running a very busy hat making studio, I made a little film which tells the story in 1 minute of when Lucky Seven met Movember.

Can’t wait for next year. I just need about 12 months or so to recover.

Absolutely Nothing To Grow : Terrariums

I do not have a garden. Very few people in Hong Kong do. Space is at a premium, property prices are eye-watering and it’s so darn hot for most of the year, you’re finding reasons to scuttle inside to the air conditioning rather than get busy with the pruning shears.  This wasn’t always the case. When we first moved here, we had a very pleasant little garden and I even – ludicrously, given it’s petite proportions –  employed a gardener. This wasn’t entirely because I am a lazy expat wife and useless with plants (I would kill mould if I could get it to grow), it was a necessity. You see one of the drawbacks to living in a virtually garden-free city, is that it is almost impossible to buy a lawnmower. If you have outside space, you either pave it, or employ a man-with-a-mower. We had lawn, and Jun was ‘the man’.

Fast forward a few years, and several moves later, not only has the garden gone, but so has a balcony. I have come to the conclusion that, out here, gardens are only good for snakes and mosquitoes (we had a particularly delightful nest of deadly pit vipers in aforementioned garden) and balconies are only for old (dead) Christmas trees, bicycles and the occasional crafty ciggy. They are not for sitting on and they are NOT, in my hands anyway, a vertiginously placed oasis of green in a concrete jungle.

However, in the spirit of female contrariness, I have decided now is the time to add more green into my life. So I will bring the outside in. I will do it in style and, more importantly, in a way that is easy to maintain and can’t be too easily mutilated by the small, destructive paws of a toddler. I will make a Terrarium.

For those not familiar with the concept (or too young) they are essentially a ‘garden-in-a-jar’ (although any suitable see-thru vessel will do). All the rage in the 70’s, these kitsch, miniature biospheres fell out of favour. Presumably when people realised that not only did they did have a tendency to look a bit naff, but that the containment factor was actually a bit of a hindrance; too much water and your succulents resemble a primordial mush, too little and you quickly acquire a post-apocalyptic desert-scape. Both equally tricky looks to pair with a macrame table cloth. 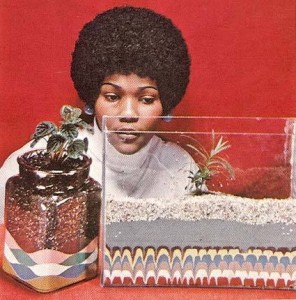 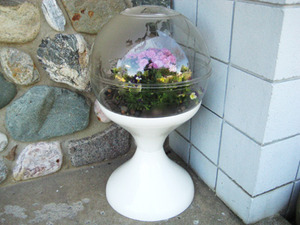 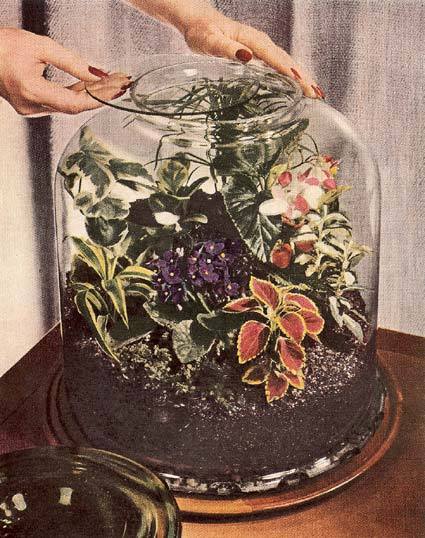 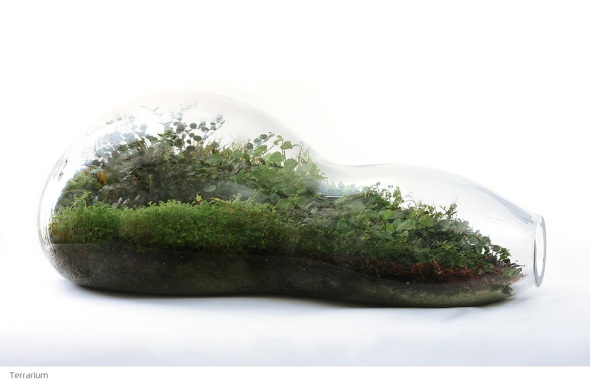 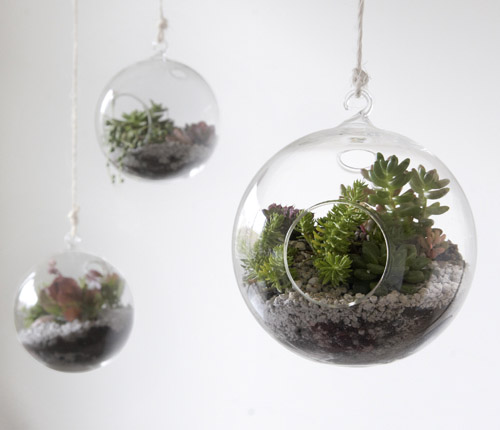 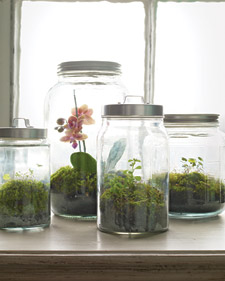 Seems they’re slowly making a bit of an ironic (of course) comeback on both sides of the Atlantic. Recently The Telegraph and NY Times ran pieces devoted to their revival and i’ve noticed them popping up on design blogs over the last few years ( Design*Sponge featured a brilliant ‘how-to’ video from Tassy of Sprout in Brooklyn, NYC, you can view here).

Today’s Terrarium lovers, it seems, aren’t afraid to inject a little humour and originality into their creations (miniature fornicating gnomes anyone?) but my favourites are the chic, modern arrangements, particularly the hanging variety. I also love the trend for repurposing antique and vintage glassware such as apothecary jars and cloches, which I think work best when you are aiming for a more,ahem, ‘romantic’ look.

I was torn.  Much was dependent upon the kinds of plants I could get my hands on. After a surprisingly successful trip to my local supermarket for miniature plants, and one to Ikea for some pebbles, sand and suitable receptacles, I decided I would try both looks. But first I needed guidance, and I implore you now, do not even attempt to try this at home without first checking out the rather marvelous blog of Tovah Martin.

I quickly realised, however, that my plants were probably still a tad too big, and I couldn’t get one of the essential components: charcoal (helps to absorb yukky bacterial spores and any gunk that might fester and ruin your plantings). But impatient as I am, I decided to roll with what I had and let fate decide. Here is my ‘wing it big-time guide’ to planting a Terrarium:

Step one: add drainage course (ie pebbles- about one inch, or half that if you are me and run out of pebbles).

Step two: add charcoal (or greenish dyed sand from Ikea if you are me- note the sand has completely covered the pebbles. Hmmph).

Step three: add soil (I kind of got this bit right but you need a special cactus/succulent mix and I think a couple of mine fall under this category, so the multi-purpose soil mightn’t go down quite so well with them). The pebbles and soil should fill your container by about a third (or halfway if you are applying my rules).

Step four: add your plants (try not to lacerate and shed all the really nice leaves when placing into the container, like I did). If leaves etc do shed on to the soil, remove – the last thing you need is for your hard work to become a study in decomposition. (Oh and try not to lacerate the last very few remaining good leaves when rescuing the other previously dislodged/lacerated leaves). 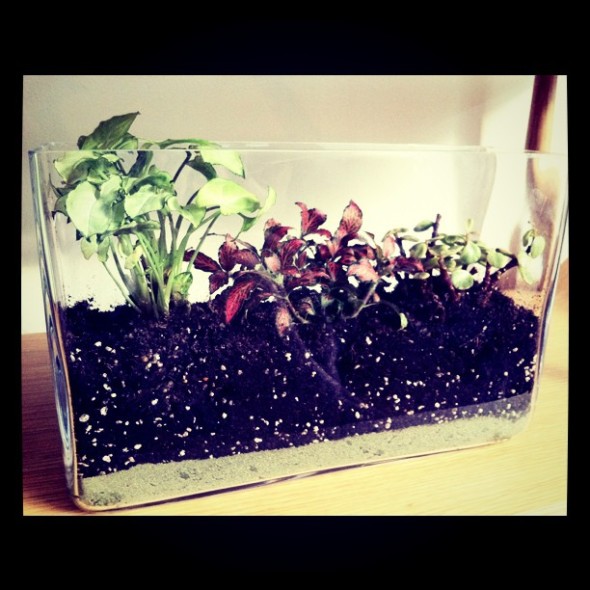 Step five: admire your handiwork. I give this one about a 6 out of 10, but it works in the space, and looks a tad more retro than I expected, so I’m happy. (ah yes, and Instragram helps a lot). 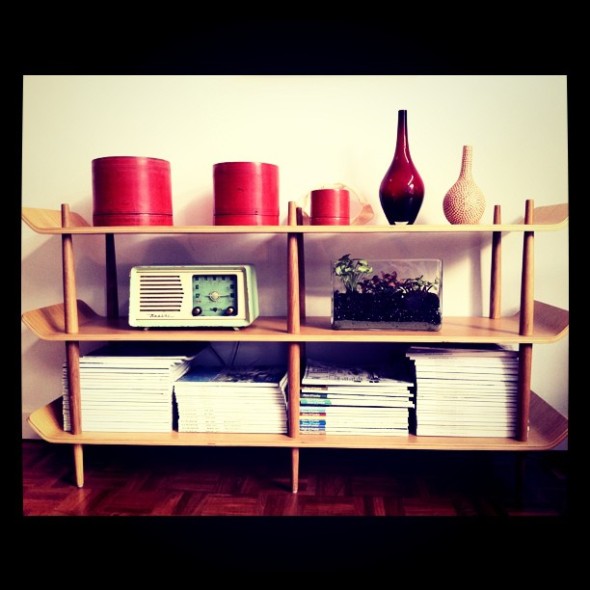 Now I would be lying if I said I didn’t think this was more of a success. In fact I would say it’s a TOTAL garden-party-in-a-vase 🙂 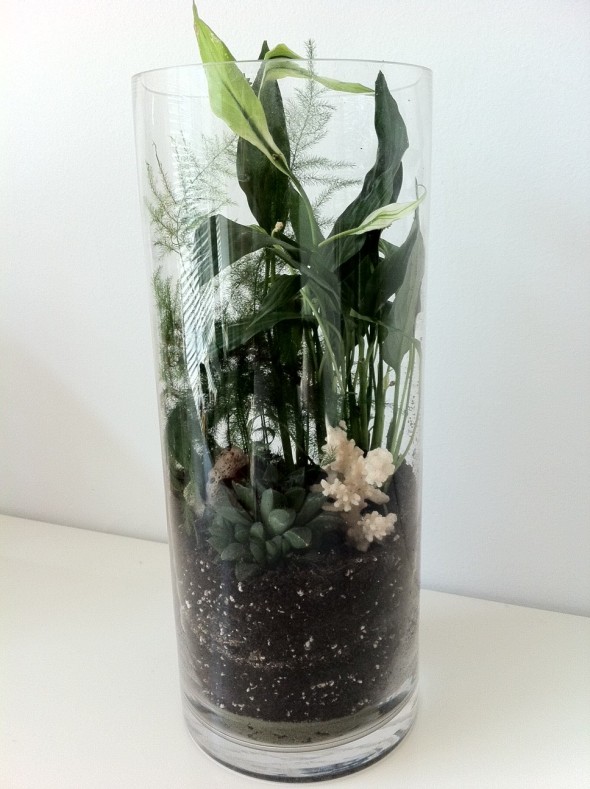 The great thing about this little project was how relatively easy it was to achieve fairly satisfying results. If, like me, you have little patience, then a Terrarium presents a pleasingly quick-hit opportunity to impress with “and here’s one I made earlier”. All that remains to be seen is how long I can keep their contents alive. Place your bets ladies and gentlemen….

Absolutely Nothing To Grow – I say tomato….

For a gardener, the culinary year begins long before the fruits of their labor show up on a plate. In the dead of winter, seed catalogues arrive in the mail, and with them the dream of a garden so large it can contain all the cornucopia of riches you’d like to grow. Writing up your order list is rather like packing for a holiday; you put in everything you need then take out two-thirds. Especially if you only have a small garden. I always order Brandywine tomatoes — an heirloom variety that produces big beefsteak tomatoes that are perfect for slicing. They have a well-deserved reputation for being the best-tasting, too. They come in red, yellow, pink and black and look beautiful on a plate.

The packets arrive in the first week of February in a teeny-tiny cardboard box hardly bigger than a seed packet itself. A moist mixture of potting soil, sphagnum moss and peat gets packed into trays, and in go the seeds. A light mist of water and on with the clear plastic lid. They sit in the basement until the little green shoots appear, then it’s upstairs on any surface near a window I can find. I always overdo it and end up with a couple of hundred plants and have to give them away to anyone willing to take them. By late March they are ready to be hardened off outside during the day, and brought in at night. Meanwhile, as soon as the earth is pliable, I dig in compost and manure. This needs to be done a couple of weeks before you put the plants in or the rich nutrients will “burn” them.

Once the baby plants are put in the ground it looks like you’ve left far too much space and could pack several more in, but this is just a illusion; by June it’s a jungle so thick you have to start cutting them back or be overrun. Tomatoes are vines, so given the chance they will grow and grow and not stop growing. I end up tying mine up to the nearest immovable object so they don’t fall over, but they still top out at six or seven feet. 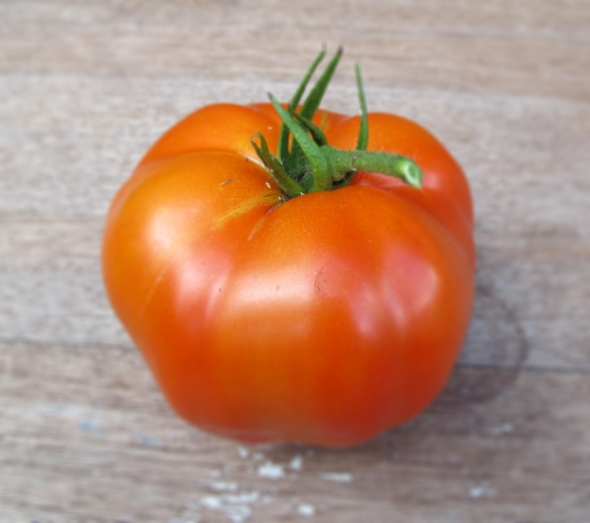 By late July, when the heat is beating down, you finally get to slice one still warm from the sun. Drizzle on a little olive oil, a pinch of Malden Salt, and voila: perfection. 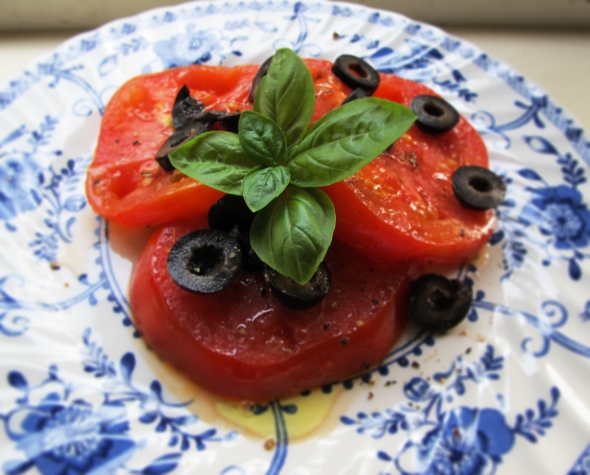