I’m a Yorkshire girl at heart. Well, my Mum is so that’s good enough for me. And being a Yorkshire girl, I like to think that I’m pretty good at making Yorkshire puddings. I make them quite a bit – small ones are my favourite – and 9 times out of 10 they emerge from the oven a perfectly puffed up success.

After a few days of Christmas indulgence I fancied something light and tasty and so decided to make Smoked Trout with Yorkshire Puddings inspired by Jamie Oliver, naturally. The trout bit was easy and completely delicious. I used creme fraiche instead of cream cheese but pretty much followed the recipe to the letter. Clever Jamie. I also made another concoction of fennel, cucumber, yoghurt and dill which made a rather lovely addition. Recipes for both at the end of the post.

So then it was time for the puddings. I did what I was told but in the absence of a suitable fat, I had to use olive oil…and I shall lay the blame right there. They rose but not in the manner a Yorkshire pudding should rise. They were more like puffs and although light and fluffy, there was no hole in the middle which is quite frankly the main reason to make them. I’ve renamed them Oxfordshire Puddings. They were perfectly nice but I’m hoping they’ll just be a one off happy mistake.

And here they are in all their glory.

The meal itself was really delicious and definitely a welcome change from the mountains of chestnut stuffing which is now safely boxed and frozen.

Put the cream cheese into a mixing bowl with the horseradish, the zest of 1 lemon and the juice from half, and mix together. Mix in most of the chopped chives, then have a taste and add a pinch of salt and pepper. It’s very important that this mixture has a bolshie attitude – it should be hot, smoky, salty, so add more horseradish or lemon juice if needed. Flake in the trout, removing any skin and bones, then use a spatula to fold the mixture together gently so you have smaller bits and nice chunks. Decant into a single nice serving dish or several little bowls or cups, then drizzle over a little rapeseed oil and sprinkle over a few more chopped chives. Cover with clingfilm and put into the fridge to get nice and cold.

When you’re nearly ready to eat, preheat the oven to full whack (about 240°C/475°F/gas 9) while you make your Yorkshire pudding batter. Get yourself a mini muffin tin (you can buy these easily online or in cooks’ shops) and pour a little thimble of vegetable oil into the 16 compartments of the tin, so you have a thin layer covering the bottom of each. Pop the tray on to the top shelf in the hot oven for around 10 to 15 minutes, so the oil get so hot that it smokes. While you’re doing that, aggressively beat the eggs, flour, milk and a pinch of salt and pepper together, either by hand or in a food processor, until light and smooth. Transfer the mixture into a jug.

Carefully take the tray out of the oven and quickly and confidently pour the batter into the hot tin so it nearly fills each well. Return the tray to the top shelf of the oven to cook for around 10 to 12 minutes, or until the Yorkies are puffed up and golden. Whatever you do, don’t open the oven door! Get your cold cups and bowls of potted fish out of the fridge and serve on a board with those sizzling hot little Yorkies and some lemon wedges.

Grate the fennel and the cucumber and put in a bowl. Add the yoghurt and mix together. Add a drizzle of olive oil and salt and pepper to taste. Chop up the dill and add the lemon zest, mix. Serve in a nice bowl. And that’s it.

Absolutely Nothing To Chew On : Crunchie Bars

If you are English you will no doubt have grown up with Crunchie Bars. This is because they have been around since 1929. Light as a feather, they give a very satisfying snap when pressure is applied with the teeth, so that the piece of “sponged” toffee coated with milk chocolate that breaks off into your warm, wet mouth immediately starts fizzing as it dissolves. As your saliva breaks down the sugar walls of each bubble, it releases the gas that got there when bicarbonate of soda was added to rolling hot liquid caramel and jet-puffed it up to several times its volume.

Crunchies used to be made in England, but now they’re made in Poland.

Crunchie is a good name for it, but you won’t find it called that in recipe books. There, you’ll find it under sponge candy, or sponge toffee, or cinder toffee, or honeycomb, or  any variant thereof. It’s easier than pie to make. If you live in a country where Crunchies aren’t sold, this will be a lifesaver. If you do happen to live where Crunchies are sold, you should still make them by hand because they have a gorgeous mellow smoky flavor, and will impress the living daylights out of children.

Into a medium to large saucepan melt ¾ cup of sugar with 4 tablespoons of light corn syrup. (You can substitute the corn syrup for maple syrup if you want to go the extra mile.)

Let it come to a golden bubble.

Take off the heat, and quickly whisk in a tablespoon of bicarbonate of soda.

It will immediately puff up – pour it into the greased pan, but do not attempt to smooth it out.

When it’s cold, you can turn it out, and crack it into lovely wedges. I find the best way to do this is to give each bit a sharp jab with the tip of a butter knife; it will split nicely right where you want it to.

If you can wait before eating it all, dip into melted chocolate and let set for the proper Crunchie Bar experience. 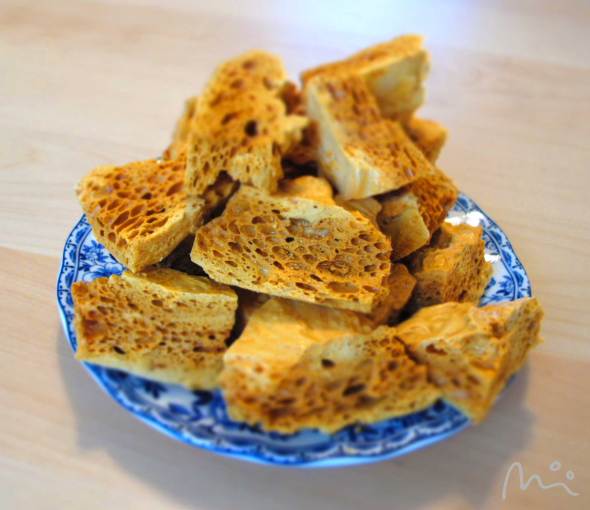 The most delicious Crunchies

Down to your last piece of sellotape? No problem, you should have this mastered by next Christmas.

Wishing you a very Happy Christmas and a joyful New Year.

ANTW Advent Calendar : A Christmas Card from the Milkman

This has to be my favourite card of the year.

Thank you Tony the Milkman.

The perfect treat to end the Christmas shopping or a bit of fuel to get you through the last weekend, there’s nothing better than a mince pie. They are ridiculously easy to make and even better when made with all butter puff pastry.

Ready made mince meat – there are all kinds out there and they pretty much taste as good as the next one.

Roll out your puff pastry – half a block will make about 12 mince pies depending on how thinly you roll.

Cut 12 circles and 12 christmas trees – or you can have stars or whatever you fancy.

Fit the circles in to the cup cake baking tray and spoon in about half a teaspoon of mince meat. This bit is up to how much you like mince meat, I don’t like too much in one mouthful. Put the tree shape on top and tuck in the corners. Brush each one with a bit of egg and sprinkle with a very little sugar.

Put in the oven for about 15 minutes or until golden brown. 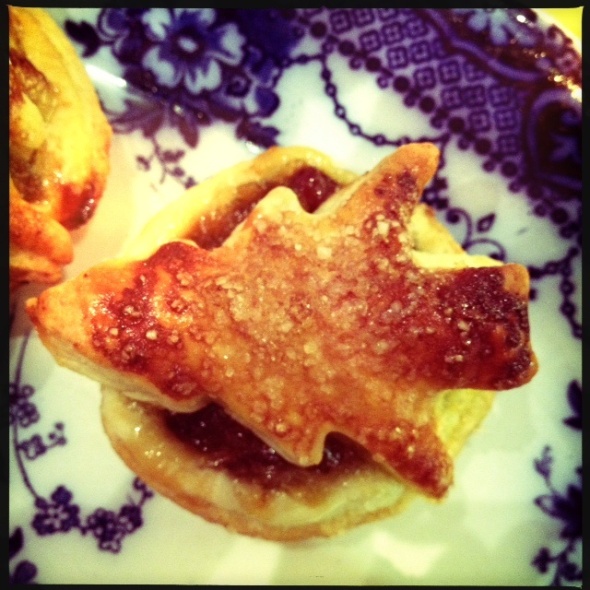 Treat the dapper gentleman in your life to one of Marwood London’s beautiful lace ties. Perhaps also tactfully encourage him to team it with a bib to avoid dripping the cranberry sauce down it.

I know I’ve written about these dinos before but I’m afraid they’re probably going to pop up quite a bit on here so best get used to them.

A brand new and brilliant collection of WSRTW homeware has been developed with the very clever people at Wild and Wolf and can now be found in stores worldwide. The full W&W range plus sculptures from the LA show, posters and limited edition products are available from the original When Superstars Ruled The World online store and they’re offering FREE shipping on orders received before 12 noon on Friday 16th December.

Here’s just a selection of what’s on offer. Click on the image to take you straight to the store. 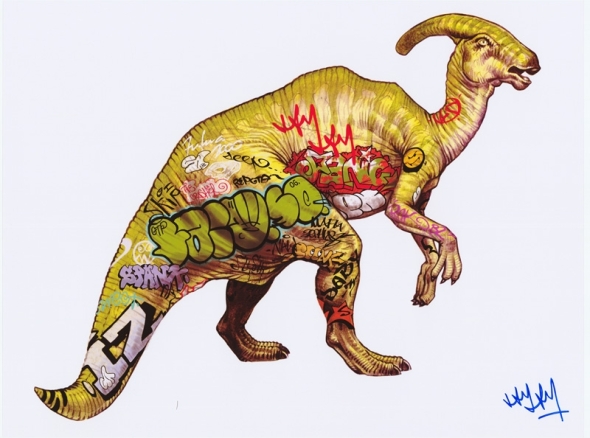 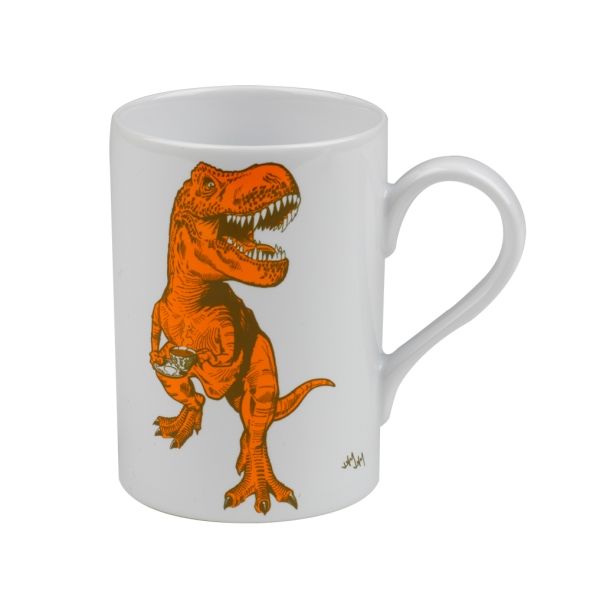 When Superstars Ruled The World is an artistic concept created by Jay Jay Burridge. The dinosaurs were first released on the world in 2010 in an exhibition of mammoth proportions which took place in an unsuspecting Beverly Hills. You can see more work from the show plus videos of the making and pictures from the space itself on the WSRTW website.

There are pop up shops popping up all over the place at the moment and here’s an online pop up which ends at midnight tonight.

Surrender, the clothing label from James Lavelle and Unkle, recently launched the Surrender Store for a limited time only, selling clothing “unearthed from way back in the Surrender Arts era.

Your chance to own a piece ends at midnight tonight – 13th December – and then it will disappear forever….

This is the time of year for tradition and the tradition in e-commerce is to bombard any email addresses you happen to have with promotional material. In that spirit may I present some seasonal prints for your mild irritation.

With snow and whatforth the first 2 are clearly so christmassy that they should put you in a very festive mood indeed. The third one, it may surprise you to hear, is hanging at this very moment in the V&A museum in the heart of London’s South Kensington (red light) district as part of  ‘Private Eye : The First 50 Years‘ which runs until 8th of Jan.

These 3 prints, signed and numbered, I am offering, and it breaks my heart to do so (it doesn’t), at the cut price rate of £30. 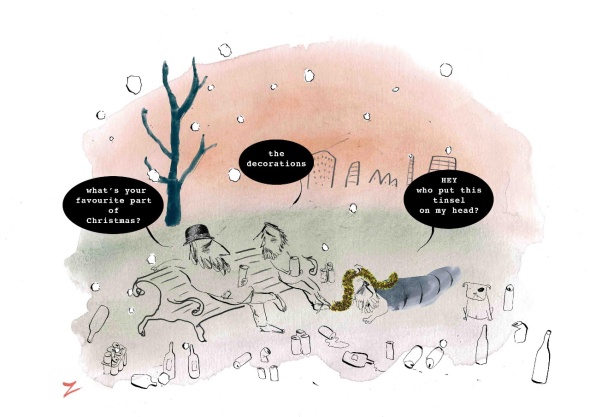 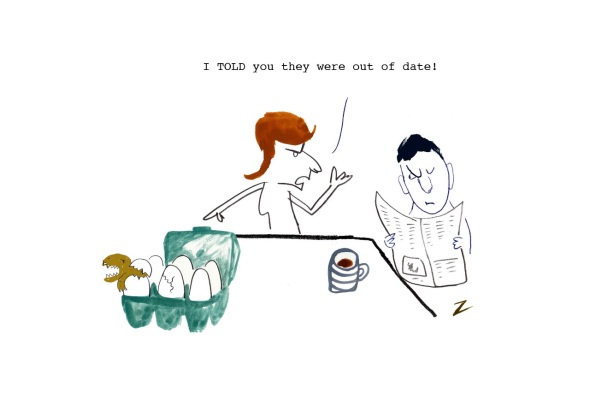 And this here link should speed you to my cartoon megastore

May your ding dongs ding merrily on high.

It’s time for the mulled wine. It was the only thing to get me through this morning’s nursery nativity in which my 3 year was a very very reluctant King. And now with just 3 weeks to go until Christmas day, I think it might have to become medicinal.

You can do it the hard way from scratch or the easy way with a bought in spice mix. I’ve used this one from the Shropshire Spice Company many times and it’s perfect. Just mix with red wine and sugar to taste. 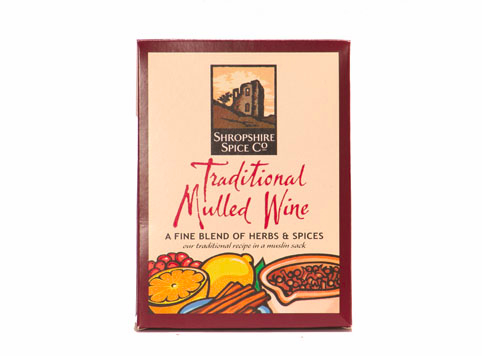 Or you could gift yourself this Mulled Wine Set from Heals which includes all you need, even the cinnamon sticks and a couple of glasses. What could be easier.