Absolutely Nothing To Write Home About : Adventures in Lone Parenting, Koh Samui, Part 1

I’m back in Koh Samui; an island I first visited ten years ago, as part of a brief, but fairly impromptu lone sabbatical to Thailand during a stressful time in my life.  I’d read Alex Garland’s The Beach, seen the film and needed a change of scenery, and some fun. This was back in the days of cheap long haul flights and a weak Thai Baht meant you could live pretty well on very little once there. The added lure of exotic, palm-fringed beaches and chaotic towns providing a frisson of danger, cemented the decision to throw caution to the wind and take off on an adventure. I felt ever-so-slightly reckless but incredibly brave and, landing in the madness of Bangkok was every bit as exciting and exhilarating as I’d anticipated; a vibrant sensorial pummeling. It was all completely intoxicating to me, and so, with the help of some rather fabulous transvestites selling rocket-fueled cocktails from a psychedelic camper van on the Khao San Road, I started as I meant to go on, and got suitably intoxicated.

All of that seems an entire lifetime away and, indeed, would have seemed inconceivable at the time to think of me now; married with two young boys and living only a hop, skip and a jump away from Thailand. At just over two hours flight, however, Koh Samui is – to an expat like me (in terms of distance at least) – what Spain, Italy or The Algarve is to sun-starved Brits. And so, in a moment of madness, I decided to apply a slightly reverse-escapist logic in order to flee the oppressive heat of Hong Kong in August; by preceding a planned family holiday here (with Daddy) with two weeks of me flying solo with the boys in a villa (actually a less glamorous sounding mews house, in a small private development with shared pool, but very nice nonetheless). Ordinarily the thought of holidaying alone with kids on a tropical island wouldn’t be so daunting if I was staying in a hotel, but the key words to note here are ‘self’ and  ‘catering’. That means no room service, restaurant, concierge or babysitting to provide a welcome respite or extra pair of hands; when the eyes you already don’t have in the back of your head, just aren’t enough.

I’d barely left the airport when the first curveball was served- my phone wasn’t picking up a local network. I realised it was locked to my Hong Kong provider and was therefore useless until I could get it unlocked and purchase a local Sim card. To be incommunicado in Thailand with two young children is a little unsettling. The issue was compounded by our location. We’d arrived at night so it was tricky to ascertain exactly where we were in relation to anything but it was clear we weren’t actually near to anything much at all, other than other houses. Daylight confirmed that we were, in fact, situated down a quiet residential lane – in Bang Rak on the North coast- with a couple of other small villa rental developments, and local housing which consists of rustic wooden cottages and modest bungalows amid swaying coconut palms. All very picturesque, but we needed supplies and not a taxi in sight and the couple of housekeeping staff milling around spoke no English and were little help. In fact to find a taxi would actually require a 15 minute walk to the main drag along dusty, pot-hole ridden roads with no pavements, amid throngs of mopeds and 4 wheel drives which appear, seemingly, out of nowhere. Throw in some mangey wildlife consisting of stray cats, dogs and chickens to line the way and you may see why I began to question my decision to brave it alone with a 14 month old in a pushchair and a 4 year old who hates walking.

Nice gaff..but a bit of a schlep from the main road:

I decided that ‘wing it’ was the only way forward and packed the children up, took a deep breath and we all marched out into the searing Thai sun to negotiate all of the above. Needless to say, we didn’t fall into any pot holes, get mauled by rabid dogs or even (astonishingly) get run over, though it did (and still does) get a little hairy at times out on those roads. Actually I was completely thrilled with the fact we were somewhat off the beaten track and could see right off the bat that this would be a very pleasant location and very much the ‘real’ Thailand.

My eldest was thrilled with the local wildlife (note this was at the very end of our lane which was well Tarmac’d, things actually got worse as you headed onto the road proper): 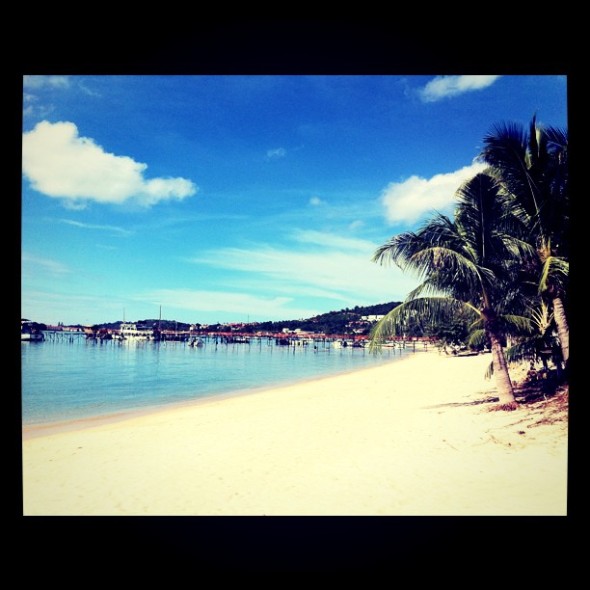 Eventually we got to the main road where we took a quick detour to check out Bang Rak beach. It was Rubbish:

I am, of course, kidding. It’s a peach of a beach actually. And so, feeling pretty happy that we had such a nice beach close(ish) by, we then flagged down a taxi which took us to what has become something of a routine trip; Tesco Lotus. Probably more ‘Lotus’ than the Tesco we know and love, but has what you need and a great little food court with Thai grub that is perfect for take-away dinner back at the house. I found a chap who unlocked the phone and gave me contact with the world. My eldest discovered Swenson ice cream and, to my slight horror (which later turned to prayers of thanks when I was tearing my hair out for distractions) one of those noisy little arcade places full of driving and shooting games and airplane rides. This definitely wasn’t the chicest of starts, but it was the beginning of our little adventure and, once the adrenaline levels had dipped somewhat, I realised we were going to be just fine. All I needed to do next was figure out how we were going to fill our days..

I’ll be posting more from sunny Koh Samui and my adventures in lone- parent vacationing over the next week or so.