← A Summer with the Supersaurs : When Superstars Ruled The World
Absolutely Nothing To Wear on holiday…. →

Absolutely Nothing To Cook – cod baked with tomatoes and tarragon

I completely made this up last night, in the hope of recreating a similar dish I had in France a couple of weeks ago. It was delicious but in the words of my husband – my fiercest critic – it could be “refined slightly”. So here it is, warts and all with the refinements in brackets…..not that I don’t agree with them obviously.

a pack of baby plum tomatoes, halved (or big red tomatoes skinned and cut in to chunks)

a handful of fresh oregano – or not quite a handful, just as much as you fancy

1 large clove garlic, peeled and thinly sliced (or 5 cloves of garlic slightly crushed with skins on)

a good glug of olive oil

a splash of good balsamic vinegar

Here’s what I did and might do differently next time….

Chop your onion, garlic and tomatoes and throw in to a roasting pan. Mix together with the tarragon, oregano, olive oil and balsamic and season with salt and pepper. Bake in a medium oven (about 150) for half an hour or so or until all the juices are starting to run from the tomatoes and the onions are soft and caramelly.

I might use large tomatoes next time and skin them before adding them to the tray. The skins on the little tomatoes didn’t bother me at all to eat, but the pile left on my husband’s plate at the end, did. I might also add more garlic – I was using some we brought home from France and was a little over cautious as it’s pretty strong stuff. I might also add a tiny teaspoon of sugar as it could have done with being a little bit sweeter. Or maybe more balsamic….you choose.

Once the tomatoes are all delicious and soft, push them to one side and lay the cod fillets in the middle of the tray. Spoon over the tomatoes so they cover the fish and  put back in the oven for 10 minutes until the fish is just flaking apart and no longer clear in the middle.

I served it with some steamed samphire and a little bit of crusty bread for the juices. And there you have it.

The photo is of the more delicious French version  – he used some seeds I think too but I reckon pine nuts could work quite well for a bit of crunch. 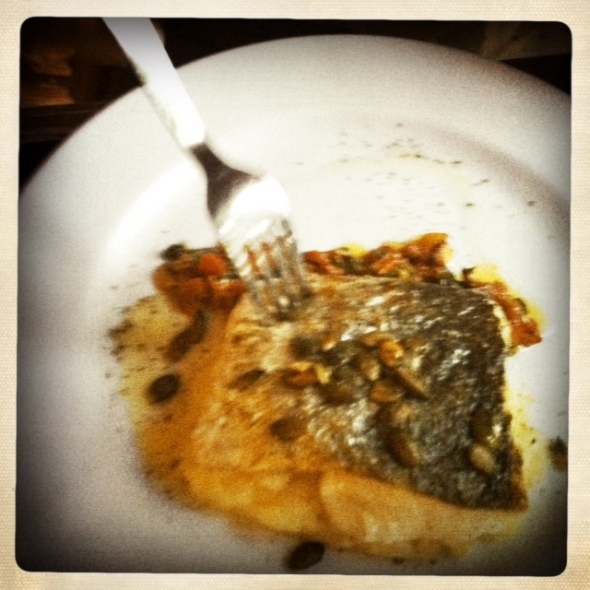