← Absolutely Nothing To Wear : Slippersocks
In appreciation of the simple things in life……. →

Absolutely Nothing To Drink : La Tisaniere, a very grown up cuppa

Who’d have thought it, I’ve gone all funny about flavoured teas. Turns out I’d rather drink the herbal variety at almost any point in the day than my usual dark, caffeine packed Yorkshire blend of choice. Don’t get me wrong, I still can’t get out of bed without a cup of proper, strong tea with milk but that’s about it. I’m a reformed herbal tea drinking person and it’s all thanks to a particular french tea maker and a new website discovery.

My first memory of a this very different and altogether grown up sort of tea drinking was when I was in Paris on a school exchange. I was staying with Laure, perhaps the coolest girl I had ever met, who lived with her father and his enormous collection of CDs. He was a music producer and also one of the coolest people I had ever met. They drank La Tisaniere’s Verveine Orange sans milk, every morning out of big white bowls and I decided from that point onwards that I would never drink anything else. It was not only delicious but was to me the absolute epitome of everything I thought of as being french and chic. That resolution lasted about a week, at which point I tired of trying to relive the Parisienne dream back home in our little cottage in Wimbledon. It didn’t seem quite the same and the only orange tea I could find came in tea leaves, which proved to be a little too much like hard work for a very impatient 15 year old.

This brings me to the wonderful world of tea according to La Tisaniere. My Mum has been drinking their Nuit Calme for years, or “sleepy time tea” as it’s better known in our house and just like my inherited addiction to The Archers, I too became a sleepy time tea convert when the time was right. It wasn’t long until I got my husband hooked and before we knew it we were loading the car up with boxes of the stuff whenever we drove to France. Then, this year, I discovered a new tea, “Ligne Svelte”, which sounded like the perfect tea to me. It’s a delicious blend of green tea, verveine, mint and hibiscus. I’m not sure it’s giving me a svelte line but who knows, it might just be very very subtle. Anyway, whatever it’s doing it’s got me hooked.

So how to satisfy an addiction to teas when I can only find them on the shelves of French supermarkets? Well for the past few years we’ve been bulk buying or having friends and family post as much as they can get away with in one package. Fine in theory but not exactly a quick fix solution when you’re nearing the bottom of the box. And then I found French Click, the most brilliant website selling all things deliciously French and delivered to your door in a matter of days. Yes you pay a little bit extra for the convenience but when you get a box packed full of Ligne Svelte tea, Amora mustard, Maggi Veal Stock (the best!) and Bon Maman lemon tarts (I can only ever find the raspberry ones here), quite frankly it’s worth every extravagant penny. 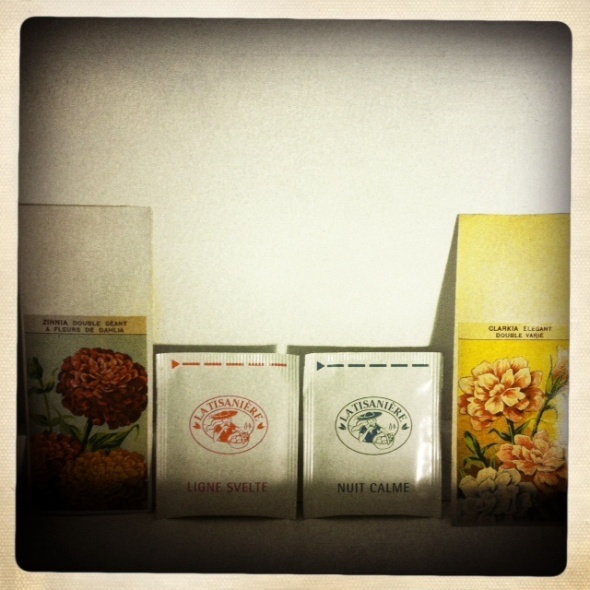 One Comment on “Absolutely Nothing To Drink : La Tisaniere, a very grown up cuppa”