← Absolutely Nothing To Talk About : Helen Seamons, Observer Fashion
To Tweed Or Not To Tweed : Ralph Lauren’s RUGBY comes to London →

The lone stint in Thailand with the kids has been fun, but hard work. Not quite travelling in the backpacker sense, but more than a holiday; I’d like to think our time here on Koh Samui, alone without Daddy, was really almost a lesson in how to live a more pared down life, without so much stuff. Actually what this translates to is a lesson in being Chief Entertainments Officer for Mummy, with not nearly enough alcohol. Mid-range holiday villas generally do not come with bedrooms full of toys and satellite TV with a full package of kids’ channels. They are also remarkably non kid-proof (think stone floors, glass tables and sliding doors to pools only a few feet away, not to mention the steep wooden stairs in ours). Keeping two boys under the age of five (the youngest just 14 months old) occupied has been quite the challenge, and very different to doing it in the safe surroundings of home, with all the familiar comforts and routine distractions to occupy them.

The pool and grounds provided plenty of fun, and the iPad (don’t leave home without one) and a few cheap plastic toys purchased from the local supermarket bought me a little more time, but the reality was clear; we needed to get out and do stuff or the kids would turn feral. I’d tried Mummy-friendly activities such as pottering around the delightful Fisherman’s village in Bophut, but, for some reason, the boys failed to share my enthusiasm. Then there were my attempts at al fresco lunches at low-key beachside restaurants which, at best, without Daddy on hand to help corral, resulted in a table of barely touched food and invariably saw me dripping in sweat and bellowing at the eldest to stay in the shallows whilst simultaneously saving the youngest from repeatedly kamikaze-ing out of a high chair;  at worst: a young, toned Italian tourist in very tiny trunks appeared from the beach to ask the entire restaurant who ‘owns’ the small boy who had fallen down wooden steps to the beach and was lying face down, crying in the sand, because he’d injured his eye.  Oh the shame (despite telling him numerous times not to play on the bloody stairs), and so, with a weary admission of ‘ownership’ I hauled him up to see he had indeed grazed his eye but, thankfully, was mostly just a little shaken.

It was clear however, that some things were just beyond my capabilities and I was going to have to put aside my own expectations of what constitutes a holiday and should embrace the inevitable – days filled with animal shows, water parks, indoor play rooms, and a particular favourite: football golf (yup- like mini golf but with footballs). A positive was that we found a regular taxi driver who became something of a personal chauffeur, and buddy for my eldest. Whilst not particularly cheap in comparison to other costs here, taxis will take you to your destination and more often than not, will wait and take you home again – all for an agreed price. The more intrepid hire cars or mopeds and drive themselves, but neither were suitable options for me given I am essentially a non driver (though I have passed my test).

The Samui I first visited 10 years ago was firmly geared towards the needs of low-budget travellers and that’s still clearly in evidence in some of the main touristy (and sometimes downright naff) areas such as Chaweng and Lamai on the East coast – but now the vibe in those places is more low-budget package tourist than outright backpacker (though the beaches are lovely and worth visiting). Things are changing, however, with an influx of luxury and boutique resorts such as W, Four Seasons and Six Senses on the North and West Coasts, and this has raised the bar too in terms of dining options and there is now a slew of destination restaurants touting ‘fine dining’. Some might say that this is ruining the charm, but not I. That’s not to say coast-to-coast luxury resorts are my thing either; rather an eclectic mix of shabby and chic, if you like, and Samui, whilst some way from being the ‘new Bali’, is displaying a growing sophistication which has encouraged more families and couples with more discerning tastes. This means, unusually for a tropical island destination, the options for family friendly activities isn’t too bad (though you’ll need to be realistic in your expectations when it comes to animal-related attractions, Longleat they are not). The best thing about travelling with children in Thailand (and particularly babies) is that you’re never made to feel as though you are second class citizens. Quite the contrary, a baby will be treated like a rock star, and by default, you become their entourage who can bask, very comfortably, in their reflected glory. It has never failed to amaze me how Asian people of either sex, and literally any age, will coo genuinely over your kids. Try walking into a 7-11 near you with a 14 month old who wants to poke the 22-year-old (male) assistant. At best, you will be met with embarrassment and barely concealed revulsion; Go East and you will be met with smiles and clucks, and “BeeBee!!”. It’s wonderful.

And so we settled into a routine of sorts: chilled mornings by the pool followed by activities in the afternoon. With more judicious planning (i.e later in day to coincide with afternoon nap time for little one) we even managed the occasional lunch and, latterly, the odd dinner. Sure there were meltdowns and hissy fits (me) and I can’t overstate enough how tricksy it can be to keep two young, super-energetic boys from doing damage to themselves (or others)-  a bit like herding cats – but my kids did not want for fun, and loved the barefoot life spotting buffalo and chasing chickens. It is entirely possible to holiday alone with young kids on a tropical island, but you need an inordinate amount of patience and must be prepared to just get out there and get on with it; and in truth it’s less of a holiday for the grown-up and more about effective troop management. But if you should ever find yourself in Koh Samui with kids (with or without a Significant Other) here are a few suggestions for things to do:

Coco Splash Water Park – owned and run by a lovely French couple, this outdoor park, with slides and a jacuzzi pool is small but lots of fun, particularly for younger kids. They serve great Thai and western food and grown-ups can book a massage in one of the Salas (Cabanas). You may even get to meet the resident bunny rabbit: Coco, who hops around uncaged.

Fairways Indoor Soft Play room – Great for when your little ones need a break from the sun, or if it’s raining. With bouncy castles, climbing frames and slides, there’s also a nice cafe downstairs with free wi-fi serving decent coffee and food. 18 months to 8 years old.

Crocodile Farm and Snake Show – possibly worth an hour or so if you really need to touch a snake or get relatively close to mostly fairly docile-looking crocs. There are a few bored monkeys in cages too. Situated just round the corner from Fairways right near the airport.

Football Golf – touted as a ‘unique’ alternative to mini golf and set in an, admittedly nice, coconut plantation, this is a popular distraction for family groups and particularly the big male ones. My boys loved it even if the little one preferred to get in the holes. Round includes a free beer or soft drink.

Mini Golf International – no footballs here but set on the hillside in the grounds of a private house in Cheong Mon, this makes for a pleasant hour or so.

Samui Go-Kart – Kids can ride in a double kart with an adult and you have the option of 45 or 75kph max speed.  Hairy stuff but great fun if speed is your thing.

Samui Aquarium and Tiger Zoo – the aquarium isnt too bad, with plenty of weird and wonderful specimens – the shark tanks were pretty cool and you could feed turtles – but you’d be correct in assuming the Tiger side has a somewhat Soviet-era feel to it, though they do appear healthy and well taken care of.

Paradise Park – lots of people recommended this place to me, and the setting – high up in the hilly jungle-like interior looking out to sea and the Anthong Marine Park- is breathtaking. The grounds are also pretty nice and there’s even an infinity pool should you fancy a dip. I just had a really hard time with the way some of the animals (beautiful parrots and gibbons) were tethered (chained) and at the mercy of the throngs of tourists who wanted to touch and take endless photos of them. This wasn’t to say they didn’t appear well fed and cared for, but it just ruined the whole thing for me. Unfortunately my eldest adored the place and particularly the deer enclosure and petting area containing bunnies, guinea pigs and albino hedgehogs. 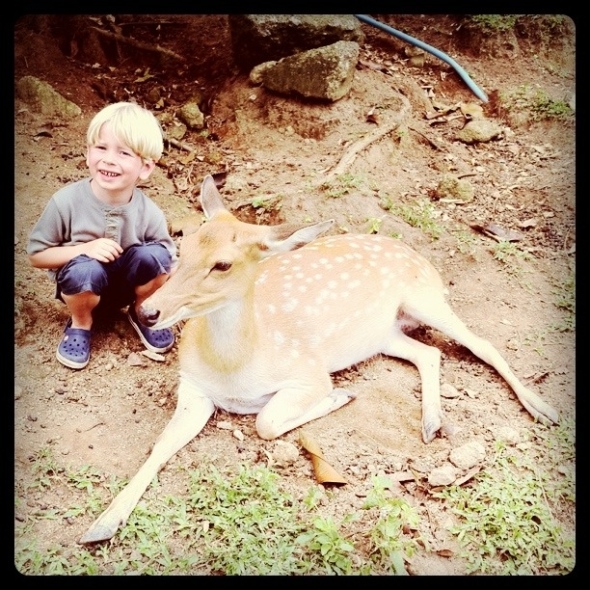 Elephant Trekking – there are various opportunities to get close to elephants (many as part of a 4 wheel drive ‘safari’ into the jungle-like interior)  but this was a tad too intrepid for us with a 1 year old so perhaps better suited to slightly older kids, but seemed to be pretty popular.

The Beach – duh…actually I always find the beach rather stressful with very young children who want to eat sand and repeatedly dive in to the sea, all while refusing to wear a hat in often blistering conditions. So we preferred to time it around the afternoon nap when we could settle at a beachside Thai restaurant and our eldest could run about while we ‘supervised’ with delicious, inexpensive grub and an ice cold beer or two. Perfect.

My final post will have the benefit of Daddy’s presence which means Mummy gets to share some of the more grown-up things Samui has to offer.