“One of the most important things you can do to say you’re Middle Class is to Knock Through. The problem many Middlings are now encountering is that the house they have just bought has already been Knocked Through. On the surface this may appear to be good news, but actually it’s very disappointing and it is hard to resist the urge to Knock Through just a little bit more. At this stage the house falls down and it is time to ring Kevin McLoud.”

So says the Middle-Class ABC by Zebedee Helm and Fi Cotter-Craig,  along with all kinds of other words of cringing wisdom.

It may not relate entirely to what we’re doing as we don’t actually own the houses we’re knocking through. We live in a semi detached cottage in the Cotswolds, not far from Oxford, which we’ve rented for the last three years and which we absolutely love. The only problem we’ve ever really had was a lack of downstairs space. We have two children under 5 and they take up an extraordinary amount of room. We also have a lot of stuff. So, we thought about moving but moving is ridiculously expensive and a great big hassle and then, something wonderful happened; our immediate neighbours decided to move, leaving a lovely 2 bed thatch cottage completely empty and in need of a little bit of TLC,  just on the other side of our downstairs loo. So, we’ve negotiated with the landlord and we’re renting the thatch cottage and knocking out the downstairs loo and joining the two together. Suddenly we’re getting all the extra space we need without any of the drama of moving. We’re just spreading out a bit.

As well as all the extra windows to look out of and of course the dream of being a detached house, it means we have a whole load of new rooms to fill and do up. Something I particularly love doing. I’m not an interior designer sort of person, nor am I particularly avant garde or visionary when it comes to the look of a house, I just like what I like and most of that involves things either found, on loan, acquired or bought (cheaply). I love my house to be interesting, comfortable and welcoming with lots to look at and a bit different from the norm. I have a particular love of fabrics and bed linens and quilts and cushions. I love colour and pictures and tins and containers to put things in. I like enamel and old cutlery and interesting tea pots and plates and things with a bit of a story. I like houses with fresh flowers and I like to be able to see my children’s toys but to also be able to put them away sometimes. I like things for the kitchen and I like curious things hanging from ceilings. My husband likes all these things, as well as Star Wars, kitsch tapestries, dinosaurs, toys and books. Together our house is a bit of a jumble but it inspires us and makes us happy and that, I think, is the most important thing about a home. 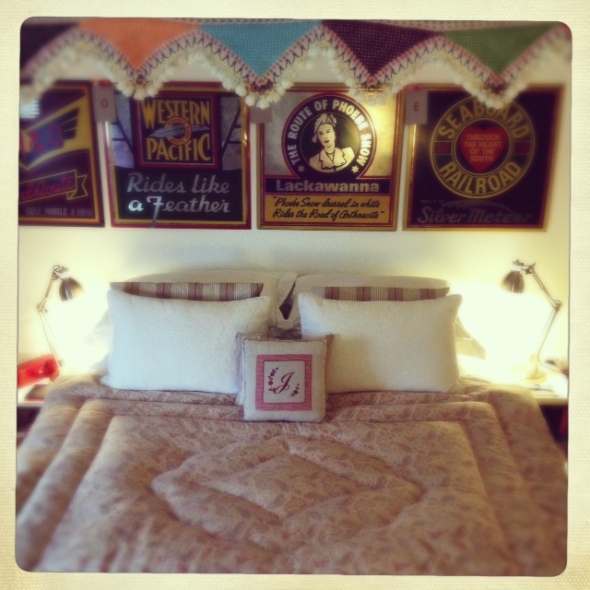 So, over the next few weeks I am going to share the plans and ideas for these new rooms which will soon be ours through a hole in the wall.  Our budget is virtually nothing so it will certainly be imaginative and it will probably involve some skips, junk shops and lots of Ebay. I doubt Ikea will get a look in, I’ve completely gone off tea lights recently.